Our get-together for a pre-Christmas lunch was a resounding success. The Netherwood Hotel in Grange-over-Sands provided a warm welcome, an excellent meal and top-class service, enjoyed by everyone.

The Society contributed to the 2014 Christmas Tree Festival in Millom. The theme for the display was 'Lighting the Way' so the poem The Wise Men's Carol was selected as being the most appropriate. The Society's exhibit was created by Peggy Troll, Dot Richardson and Sue Dawson. They worked on the image of the 'carnival sky' mentioned in the poem and the tree was topped by a star streaming with ribbons in rainbow colours. The quotation 'If you'd been there you'd have had to sing' was linked to the decorations shaped like brass instruments on the tree, and they were also tied with brightly-coloured ribbons.  The Festival took place at St George's Church from December 6th to 21st. 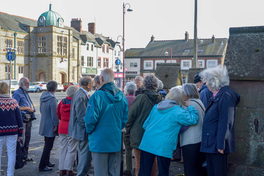 Norman Nicholson's attitude to war and the way war influenced his writing were illustrated and debated at the Society's autumn event, Norman Nicholson: Visions of War and Peace at the Millom Network Centre.

Dr Martyn Halsall, Poet in Residence at Carlisle Cathedral, delivered a paper entitled Norman Nicholson's Wars - the theology of place in his poetry.  He discussed not so much Nicholson's overtly Christian poems but the way his lifelong allegiance to both Christianity and a provincial location could be blended into what, Martyn argued, can be described as a 'theology of place'. He said: 'Out of this mingling of location and belief came a transposition through which  Nicholson brought fresh insights, and renewed life, to a faith even then cooling in an increasingly secular society, like the slag banks after the steel works' closure.'

Dr Malcolm Morrison, a retired family doctor from Edinburgh and current President of the Melrose Literary Society, spoke on the subject Two Poets and a Composer - Response to War. The composer was Benjamin Britten and the poets Wilfred Owen and Norman Nicholson. Malcolm contrasted the very different fortunes of the three men during wartime - Owen, actively engaged in WW1 in 1917 and 1918, losing his life just a week before hostilities ceased; Britten, a pacifist who moved to the USA when WW2 broke out and later registered as a conscientious objector before composing his celebrated War Requiem; and Nicholson, not fit enough to join up in WW2, observing events from 'the perimeter and fringe of war,' as he put it in the poem that Malcolm highlighted, Waiting for Spring 1943.

Nicholson, Malcolm argued, is worthy of status as a 'war poet' and referenced two anthologies to support his claim, both from 1942. Poems of This War (edited by Patricia Ledward and Colin Strang, Cambridge University Press) includes Cleator Moor while Poetry in Wartime (edited by MJ Tambimuttu, Faber) includes five NN poems.

The afternoon also featured a walk to Millom's two war memorials, guided by Marshall Mossop, and discussion groups led by Antoinette Fawcett and Alan Beattie examining the Nicholson poems The Parable of the Sower (unpublished), Cleator Moor, and Bombing Practice.