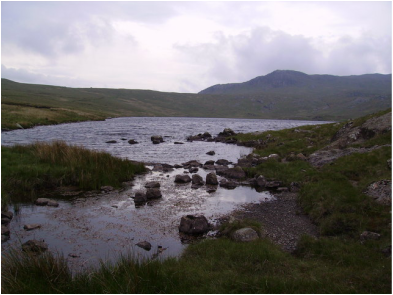 Blea Tarn. photo: Michael Graham, geograph.co.uk
The poem starts in our own present, somewhere in the Lake District, with a dramatic picture of crags crashing to the tarn – the tarn in question may well be Blea Tarn, now designated a Site of Special Scientific Interest precisely because of its importance for palaeo-environmental studies, which demonstrate the decline of the elm here as being correspondent with the dates of the Great Langdale Axe Factory. The crash of the crags is not only metaphorical – an image of steep-sided mountains seeming to descend with immense velocity into the waters beneath them – but also literal and symbolic.  The crags literally crash into the tarn because they are now scree slopes – covered in loose fragments of eroded rock which slide down to the base or sometimes mantle the slopes entirely.
Symbolically the crags are crashing too because in the broader scope of time the mountains may disappear entirely.  If we could see that process speeded up, then this could well seem like a form of crashing, although later in the poem Nicholson imagines the result as the ‘ground-down stumps / of a skeleton jaw’.

This process of erosion may happen of itself, without the intervention of human beings, but as with the decline of the elm in northern Europe in Neolithic times, human practices greatly speed up that process.  Seven thousand years ago, the poem tells us, the tops of the now bare Lake District fells and mountains were like sea stacks and island skerries, spiking up above a green ocean-like ‘surge of oak, birch, elm’.  This is where the word ‘backend’ appears, performing a double function.  Nicholson imagines the tide of green ‘ebbing to ochre / and the wrackwood of backend’, first seeing, almost as in a modern nature documentary, the trees slowly change their colour from green to ochre, the browns of autumn looking like ‘wrackwood’, i.e. seaweed – wrack – floating on the tide.  But the word ‘wrackwood’, invented by Nicholson, also has connotations of decay, of rubbish, and of wrecking, and signals the second function of ‘backend’:  to herald the decay of the prehistoric natural flourishing which the second stanza describes.

In the third stanza, time shifts forward four thousand years to the period when the elm almost disappeared, while the fourth stanza gives us the reason for this disaster: the effect of human beings on their own habitation, when ‘Stone axes, / chipped clean from the crag-face, / ripped the hide off the fells’.  Once the protective cover of the trees has gone, the earth erodes, and the flaking of the rock begins.

The poem then cuts to the present again, and describes further human exploitation of the land: ‘electric landslips crack the rock / drills tunnel it; / valleys go under the tap’ (i.e. valleys are flooded to make reservoirs to provide us with tap water).

The picture becomes bleaker still, with runnels created by dynamite channelling ‘poisoned rain’ and the ledges of the mountains being filed away by threatening ‘wind-to-wind rubbings of nuclear dust’.

At the end of the poem, Nicholson, seeing far into the future now, warns us that our manipulation of nature, intended to make a hostile environment into a human habitation, may well have catastrophic consequences:

under the scree,
under the riddled rake,
beside the outflow of the reedless lake,
no human eye remains to see
a landscape man
helped nature make.
​
Nicholson chose the word ‘backend’ with care to fit both the local setting of this poem and to make his ecological point, which is certainly not that humans shouldn’t interfere with nature – we too are part of the natural ecology and the earth provides us with what we need to make it into our ‘local habitation’.  Yet, as the decline of the elm shows, although our shaping of nature to our needs can be beneficial, not only to ourselves but to the ecosystem, it can also have inadvertent and devastating consequences.  The poisoning and fracturing of the earth by the forces now at our disposal – including, as Nicholson saw it, nuclear energy, may lead to the disappearance of all that sustains our lives.  That would be the backend of all backends – a decline from which recovery might well be impossible.

​ 3.    The book Memorious Earth by the collaborative artist-writers Autumn Richardson and           Richard Skelton (together known as AR) contains a section entitled ‘Of the Elm Decline’.  Richard Skelton’s personal website is here.
​
COMMENT
from KATHLEEN MORRIS

I love your article on 'backend'. it captures within its own scope the melancholy of the word you are writing about.

I have also been discussing it with a couple of archaeologist and historian friends. We wonder whether some of the confusion about exactly what 'backend' refers to may be attributed to the changes in calendars. When the year began in March, the back end of the year might have been as late as February/early March - still wintry weather. Now we have new year immediately after Christmas, perhaps we have displaced the back end of the year by a few weeks!