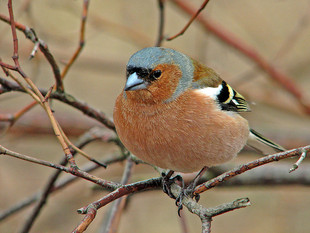 Chaffinch by Marko Kivela via www.creativecommons.org
According to the Oxford English Dictionary, the word ‘spink’ – a finch, or more specifically, a chaffinch – was once widespread but is now confined to dialect usage.  The question is which dialect?  Where is this affectionate term for the chaffinch still used?  Stefan Buczaki’s 2002 Fauna Britannica says that ‘spink’ is still current in Suffolk, yet Mark Cocker and Richard Mabey, in the slightly more recent Birds Britannica (2005), tell us that the term is widespread throughout Britain, particularly in northern England.  The name is thought to derive from the bird’s characteristic call, which has a ‘bright and purposeful quality’, ‘often transliterated as ‘pink’ or ‘spink’ (Cocker and Mabey). An imitative name then – based on the call that the bird seems to make – and indeed the word ‘finch’ (in Dutch vink, in Old English finc) has the same onomatopoeic origin.

The chaffinch is our second most common breeding bird, and can be seen all the year round.  It is perhaps particularly visible in winter and early spring, when there is less tree and ground cover, and when the male’s bright reddish-pink cheeks and chest are most visible. The word ‘spink’ is likely to have been completely common as a name for the bird in Nicholson’s youth and well beyond, since the more common the bird, the more likely it is that people continue to use local and dialect names for them.  As Peter Hayman tells us in The Birdlife of Britain (1976): ‘The huge number of local names reflects the familiarity of Chaffinches and the affection in which they are held’.

Nicholson uses the word ‘spink’ three times in the Collected Poems: in a poem which has the dauntingly long but perhaps slyly humorous title ‘On a Proposed Site for Council Houses, Holborn Hill Ward, Millom Rural District’ (p. 185); in ‘Footnote to Genesis 11: 19-20’ (p. 231); and in the poem I want to concentrate on in this short article, ‘Wise Men's Carol’ (p. 259), one of the lyrics in what I see as Nicholson’s Christmas folk oratorio, ‘No Star on the Way Back’.

In ‘On a Proposed Site for Council Houses’, spinks have nested on a weedy half-rural, half urban bank, a dyke where sorrel and knapweed and sooty wild cherry grow, a place which seems as if it was never inhabited by any other creature but this bird:

And often it seemed, in spite of the smoke, in the tang of a March morning
(Last autumn's sorrel stiff as straw, umbrella-frames
Of knapweed, cockerels striking their matches, dead grass on the bank burning),
That none here but the spinks had ever made their homes.

In a poetic twist, signalled in the next stanza by the command ‘Look!’, Nicholson lets us see the ruined ground-plan of an old farmhouse, and shows us that the place has always been intertwined with human habitation, and is thus a fitting site for the building of social housing – human nests.

Birdlife and human life can co-exist, although without proper mutual understanding, yet with an awareness which enriches the lives and language of humans, even if humans egoistically project their own concerns and over-intellectualizing onto the birds, as Nicholson seems to imply in the second ‘spink poem’ – ‘A Footnote to Genesis II: 19-20’.  Man ‘buttons the bushes with eyes of spink and linnet/ That catch a gleam of his own in the dark green doubt of the leaves’. Although ‘there is no word for bird in the bird's diction’, ‘creatures / That are what man means by bird have their own word for man’.  In this poem Nicholson seems to be questioning the way in which humans try to pin down the essence of a creature such as a bird by naming it. These names, the poem implies, are not what a bird actually is. And we even fail to recognize that birds have diction and words too, for birds in Nicholson’s inclusive vision have also named ‘man’ (i.e. the human race).  It is as if in this poem Nicholson is reversing the Genesis story in which Adam gives names to all the creatures, thereby questioning that tradition of apparent human supremacy.

In the final ‘spink poem’, the apparently simple ‘Wise Men’s Carol’, the situation is very different. The human world and the natural world are shown as being joyously and even riotously intertwined – as they always have been and always will be.  Yet that interdependence and paradisal wholeness are not usually apparent to us.  In Nicholson’s telling of the good news of the birth of the Child, through the song of the Wise Men, a revelation is given: on that day of birth and newness, ever-present and ritually celebrated each year, the world discovers that ‘a snippet of heaven’ is and always has been here on earth.

It is a delightfully jaunty poem, with rollicking rhythms which are just begging to be sung out, as the words themselves imply:

If you'd been there you'd have had to sing---
When the sun came up on the Christmas world.

And, after a new dawn which brings in a ‘new tune’, a ‘carnival wind’ which blows the darkness away, and a topsy-turvying of the seasons (‘summer in winter and harvest in spring’), the cue to us all to burst into song is the carolling of two well-beloved songbirds:

But why these two particular birds?  Perhaps for the simple reason of opposition, as in these lines, which catch two completely different types of behaviour: the chaffinch does prefer to keep to the shadow of trees and bushes, and is a ground feeder, whilst the skylark soars into the air ascending higher and higher with its sweet song.  Earth and air are thus both encompassed as regions touched by the ‘Carnival Morn’ of the Nativity.  Yet Nicholson keeps the tone slightly comical and down-to-earth in his cheerful representation of the two small birds as twanging into song, as if they are the avian equivalents of George Formby.

But there is much more hidden symbolism going on here.  The skylark – the bird which sings ‘in the light’ – had many symbolic associations in earlier times, including the notion that it is the bird ‘which sang hymns at the gates of heaven’ and heralded the dawn. This Carnival Morn is thus heralded by the little lark, singing its hymns of joy and revelation.  Whilst the ‘spink’, the cheery chaffinch, is traditionally associated with the Nativity, because it was thought of as having picked through the chaff in the manger (The Continuum Encyclopaedia of Animal Symbolism in Art).  The two birds therefore are entirely appropriately there at the birth of the Child, as representatives of the animal (life-centred) and spiritual (creative and aspirational) sides of the natural and human world.

Nicholson had a particular love of birds, nurtured in his time at Linford Sanatorium, Hampshire, in the almost two years he spent there, between the ages of sixteen and eighteen.  Here he lived in a cabin in the woods with one unwalled side completely open to the outside world.  He describes this in his autobiography, Wednesday Early Closing (1975, p. 188):


It was the birds, of course, which caught the notice of the patients. From my very first morning I was aware of them: not just robin and blackbird and songthrush, but birds which I was certain I could never have seen before, birds of a brightness and brilliance which I could scarcely believe was to be found in England – chaffinch, greenfinch, blue tit, great tit, magpie, wagtail. They are all, as I now know, among the commonest birds of suburb and farmland and can frequently be seen in my own back yard in Millom, but, at that time, they seemed to be completely new discoveries.


Notice that the chaffinch is the first bird of brightness and brilliance mentioned in this list of ‘new discoveries’.  In total, in just two pages or so of this memoir, Nicholson mentions thirty-one birds by name – and tells us that he taught himself in this environment ‘to spot and identify at least sixty species’ (WEC p. 190).  And the most charming of the bird stories here is that of the flock of chaffinches, ‘thirty or forty or fifty of them’ invading the inside of his chalet like ‘a swarm of enormous, though friendly, bees’ (WEC p. 189).  No wonder that Nicholson had such an affection for the spink. No wonder that he wanted it to play an important part in his version of the Wise Men’s story.

Note: The lyrics of No Star on the Way Back, which includes the poem ‘Wise Men’s Carol’, were set to music by the Scottish-American composer Thea Musgrave, and have been published as Two Christmas Carols in Traditional Style for Chorus plus Ensemble.  Mention of Musgrave’s involvement in the 1963 Border Television production of the performance can be found here.