​Word of the Month has returned from a six-month break with ‘lonning’, a distinctively Northern English word, used several times in Norman Nicholson’s poetry, and in some of his other works. Kathleen Morris investigates how word and landscape inter-relate, and pinpoints the unselfconscious and affectionate way in which Nicholson used the term.

Readers interested in current dialect usage in Cumbria might also wish to take a look at the Google Map created by Alan Cleaver, which lists and pinpoints 290 or so Cumbrian Lonnings, also giving short descriptions and quotations about these. Millom has two lonnings mentioned, according to Alan, who quotes Grevel Lindop’s Literary Guide to the Lake District for one of these – Gipsy Lonning. Grevel himself is, of course, quoting from our very own Norman Nicholson.

Interestingly, Engine Lonning, in Carlisle, mentioned in Kathleen’s article, turns out to be a nature reserve within a post-industrial landscape. There are links there too with Nicholson’s concerns…
​LONNING n.

Taken simply in this phrase, the word needs explanation. But in the same collection, the word is used in a context which makes its meaning clearer, in ‘The Bloody Cranesbill':-

- Then through the allotments, the playing field, the lonning, out
To the links and warrens…

So a lonning is a lane or track, something less than a road, more rural than a street. The Lakeland Dialect Society, defining it as a lane, gives the spelling as ‘lonning’, but the Cumbrian Dialect article on Wikipedia spells it as ‘lonnin’, which is closer to the truth. Dialect speakers are rarely punctilious about the inclusion of that final 'g' in speech. The website www.thedialectdictionary.com also opts for ‘lonnin’, in its Cumbrian section, defining it as a lane or country road. Written sources on the whole seem happy to define it as a northern English dialect word, including Northumbrian, but I have a memory of being surprised when listening to a talk by that most Irish of poets, Seamus Heaney, and hearing him use the word ‘lonning’ to refer to a lane. He doesn't, though, use it in 'A Paved Text', his contribution to 'Between Comets: for Norman Nicholson at 70', despite mentioning 'those Cumbrian phonetics'. 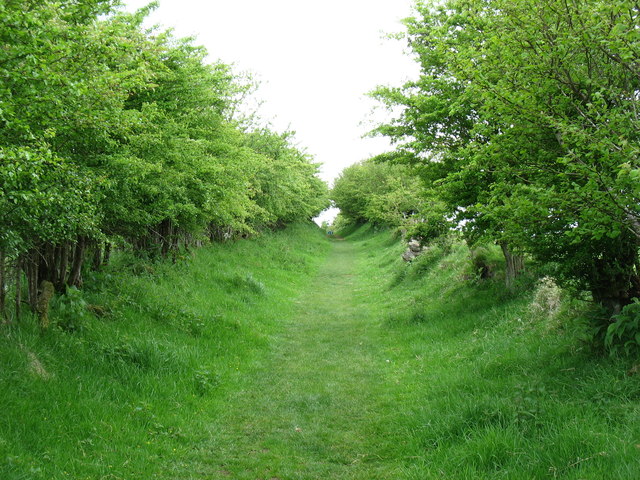 photo: DAVID PURCHASE
​Given that such a large proportion of NN's poetry relates to the natural world, to his own locality, and to specific descriptions of places and scenes, it is surprising that he uses the word ‘lonning’ on only a handful of occasions. Always it is ‘lonning’ – it never loses the final consonant, or changes to a variant spelling. Variants do crop up in other places - not just ‘lonnin’, but ‘lonnen’, ‘lonnan’, and ‘loanin’, a good illustration of the uncertainty of dialect in writing.

NN may not have used the word very often in his poetry, but when he does use it, it is in an affectionate and unselfconscious manner. I'm not sure what he would have made of current usage. You will be hard pressed to find a lonning in a guidebook or tourist publication unless they are making a really embarrassing attempt to be folksy, even though other local words appear. They use lane, track, footpath, green lane, and so on.

However, if you check out a current map of Carlisle, you can find a place called Engine Lonning. This is the presumably trendy name given to a development in a former railway yard – surely not a lonning at all.

This demonstrates the perennial difficulty with words that exist in speech rather than in writing. They can be hard to pin down. But ‘lonning’, like so many such words, is not an archaism or a literary curiosity, just a piece of everyday vocabulary. A highway with a formal name is unlikely to be called a lonning, but a lonning can have an informal name, also known only to speakers as it would not appear generally in writing. NN would have known Aggie’s Lonning, on the outskirts of Millom (but who was Aggie?).

It also shows the way in which vocabulary used for describing places changes to accommodate the changing face of the landscape. I’ve a feeling that in the past there would have been many more locations known as lonnings than there are now. Gradually many of them will have become urbanised, developed, gained a hard surface, and then become known by a formal name bestowed by the council. Once a ‘proper’ name arrives, a lane’s origins as a lonning disappear and are forgotten.

Perhaps lonnings are better described as topographical features than place names. As a lonning changes, so its nomenclature may change. The descriptions used by NN are a moment frozen in time, when the lonnings were just right in their nature to be described that way. Something more formal would have been given a more formal name; something that didn’t quite measure up to lonning standard would have been called something else.

So if lonnings in the landscape are a transitory or diminishing feature, we should treasure uses of the word in literature, especially when it occurs, as it does in NN’s work, in contexts where it adds so much to the image generated by the description.

Kathleen Morris
​
​
​Comment
​
Kathleen Morris’s article on January’s Word of the Month, ‘lonning’, reminded me of the ‘lonnin’ near where I grew up on the southern edge of Workington. As Kathleen notes, it was never given a final ‘g’ in speech. In fact we used it only in the plural, and would speak of going ‘up the lonnins’. A distinct short ‘i’ in the second syllable differentiates the word from the majority of present participles and gerunds ending in ‘- ing’: in those, most local speakers not only drop the ‘g’, but reduce the vowel to the neutral [ǝ] or, after some consonants, elide it altogether; so a boxer’s occupation is ‘fight’n’ and a sprinter’s, ‘runnen’.
‘The lonnins’ was a favourite haunt of courting couples, blackberry-pickers, and children, myself included. It was our entry point to open country, trees for climbing, a beck where we fished for ‘tiddlers’ (minnows) in jam-jars, hoping in defiance of experience that they would thrive. Broad, unsurfaced, stony and rutted, it led between field-hedges to a farm and beyond to what had once been a workhouse, later a ‘fever hospital’, and in my youth a geriatric annexe to the town’s infirmary, finally closing in the mid-1960s. The site, and all that semi-rural fringe of the town, was soon engulfed by building expansion. ‘The lonnins’ is long buried under tarmac; but a stroll up the lonnins of memory can transport me in a moment to scenes of childhood freedom and adventure.