RADIO 4 aired a thoughtful and very welcome half-hour programme about Norman Nicholson on Sunday 5th January 2014 at 4.30pm with a repeat on Saturday 11th January, at 11.30pm.  This was the programme's official billing:

Eric Robson examines the unique and unjustly overlooked Cumbrian poet Norman Nicholson. Born in 1914, Norman Nicholson lived all bar two of his seventy three years in the same small industrial town, most of them in the same house. Millom (Cumbrian dialect for "At the mills") is not the Lake District of Hawkshead or Windermere. It’s a place where industry came and went, where the population rose and fell. Yet it was here, in isolation from the literary world, that Norman Nicholson became a world-class poet. He wrote about quarrying and iron works, slag banks and granite. He was one of the first to argue that industrial heritage should be valued on a par with our cultural heritage. Championed by TS Eliot, Ted Hughes and Seamus Heaney, Norman chose to focus his energies on a non-literary audience, spending his spare time lecturing at local Workers Educational Associations. For this poetry feature Eric revisits the town Norman dedicated his life to.

A Somethin' Else production for BBC Radio 4. The programme had the welcome side-effect of inspiring hundreds of listeners to visit this website!

CHARLIE LAMBERT WRITES: Radio 4's programme about Norman Nicholson yesterday, 'Provincial Pleasures,' has provoked a range of responses from people who have contacted the website or our Facebook page. Among them is Penelope Saladfingers who writes:I am the great-granddaughter of Marmaduke Fawcett. Norman wrote about Marmaduke and my Grandfather Thomas Fawcett, in Wednesday Early Closing. He signed his book for my mum, thought you might like to see it.
Michael Mitchell on our Facebook page posted: Years ago I used to read George Mackay Brown. I believe he showed the same virtues of the provincial as Norman Nicholson. He too was overlooked by the literary establishment. My opinion of Philip Larkin took a hard knock listening to the Radio 4 programme yesterday.
(The programme reported that it was Philip Larkin as editor who took the decision to omit NN from the Oxford Book of 20th Century English Verse).

Chas Ryder, also posting on Facebook, said: I have not read any Norman Nicholson since I was in my twenties back in the seventies. This programme reminded me what I had been missing for all those years. I will start to re-read with eagerness and great pleasure.


The Radio 4 programme has also produced new enquiries about membership of the Society.

posted January 6th 2014
WEDNESDAY JANUARY 8th
In Carlisle's Caffe Nero a woman was spotted reading Sea to the West. BBC Radio Cumbria ran a series of interviews about Norman Nicholson throughout the day, including Neil Curry and later Peggy Troll in the breakfast show, and an excellent chat by reporter Neil Smith with Simone Faulkner and two students from Millom School. In Kevin Fernihough's morning show Neil spoke again to Peggy and also Sue Dawson and Dot Richardson, and Charlie Lambert was a guest on Emma Borthwick's drivetime show.
At Carlisle Library it was a full house for the afternoon of talks organised by Bookends. David Cross spoke about NN and the artist Percy Kelly and made the point, "Beautiful things can be found outside the National Park."
Alan Beattie presented an enlightening talk about NN's verse plays, reading extracts along with his wife Kay and surprising most of the audience with the relevance the plays have to contemporary issues such as sustainable agriculture.
Neil Curry took the audience through NN's poetry. Among those he picked out was The Pot Geranium which, said Neil, was Norman's response to the critics who "accused" him of provincialism.
Finally Kathleen Jones spoke about her new biography of Nicholson The Whispering Poet. Among many fascinating points in a very informative session Kathleen said that Norman's tuberculosis influenced his entire life: it taught him to be selfish to protect his health, but Norman had a sweetness about him which meant people would forgive him his egotism.
News that this evening's event with Mike Smith and Mary Robinson at the Wordsworth Bookshop in Penrith was also a sell-out completed a very satisfying day. One hundred years from the day of his birth, Norman Nicholson is still making us think, giving us a chuckle, and attracting sell-out audiences. 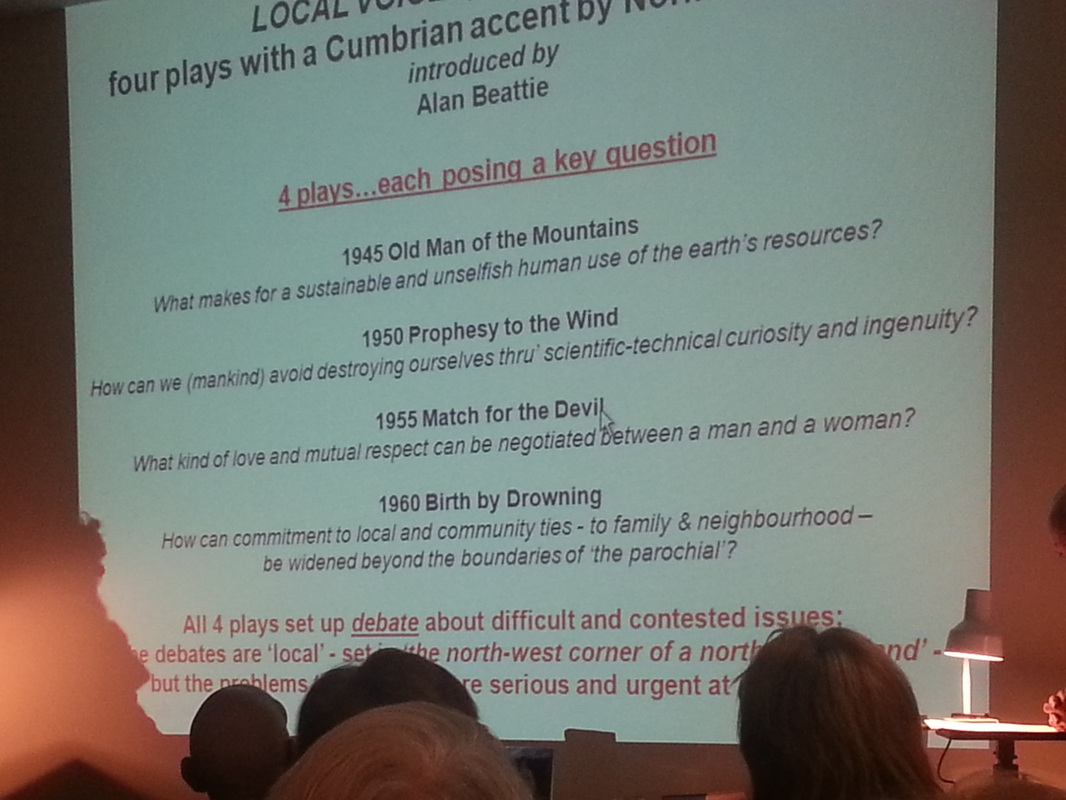 WEDNESDAY JANUARY 8th
This event at the Wordsworth Bookshop in Penrith was a lovely, intimate evening in a great venue.  Mary Robinson and Mike Smith presented slides, readings and recordings of, or relating to, Nicholson and his work, and several enthusiasts contributed readings, including Phil Houghton, a long-term member of the Society.  A version of Mary's talk is available on the internet at her blog:  http://maryrobinsonpoetry.blogspot.co.uk/.  Antoinette Fawcett, editor of Comet, made a short presentation about the society. Mike's recordings of Nicholson date back to the late 1970s and were made at 14 St. George's Terrace.
FRIDAY JANUARY17th
The centenary celebrations continue to spark off reflections and reminiscences. Simon Johnson sent this via our contact form: I come from Furness. Spent a lot of time on Walney beach (Ernse Bay) looking across at Millom and Black Combe. Have always loved poetry. Have kept pot geraniums for decades because they do just what he says they do in the poem. Have known of Norman Nicholson. Have read his poems and taught the odd one in class at school. But didn't know he came from five miles across the Duddon sands from where I used to stand as a boy and feel inspired.

And Brian Anderson posted this on our Facebook page:
I have just started reading Kathleen Jones' book 'The Whispering Poet' on Norman Nicholson. I note in the penultimate chapter she refers to him 'visiting schools in the 1970's'. And indeed that's what happened. Norman visited my 'A' level English Literature class in 1976 and discussed the themes and inspiration behind some of his poems, Cleator Moor, Windscale, Whitehaven etc. I have greatly admired his work since then.

All similar thoughts and memories are welcome.

Alan Beattie gave a talk entitled Norman Nicholson and Sheila Fell: grieving for a lost landscape at Tullie House, Carlisle. Norman Nicholson and Sheila Fell knew and admired each other’s work, and she wanted him to open an exhibition of her paintings in Maryport in 1964. This session re-imagined a conversation between them, then explored some common ground in their preoccupations with Cumbria, as seen in his poetry and her paintings.

Norman Nicholson, the Whispering Poet - a tribute. Kathleen Jones and Neil Curry gave talks at one of Cumbria's most prestigious literary fesitvals. 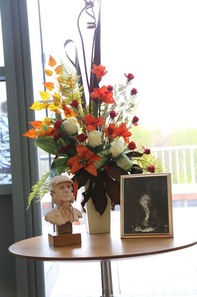 The Society's Gala Lunch at the Lighthouse Centre in Haverigg went extremely well, and was enjoyed by all.  Guests commented favourably on the venue, the speakers, the table decorations, the food and the good company, not to mention the weather, which after a short showery start turned out to be glorious! Highlights included Alan and Kay Beattie's play reading from 'Old Man of the Mountains' - especially fitting in that Black Combe was visible in the background behind them. We finished with a recording of Norman reading the Pot Geranium, which evoked a lot of memories and emotions. The red balloons and geraniums on every table filled the room with colour and made Norman's words even more poignant.

The University of Cumbria is a special institution – the newest university in the UK according to its website, and also one with a long and complex history.  Whilst Norman Nicholson would not have been familiar with the University as it now is, he was certainly a welcome visitor at Charlotte Mason College, Ambleside, which has become a ‘heritage institution of the university’.  He would also have known St. Martin’s College, now its Lancaster campus – a piece of Cumbria Over Sands – where a wonderful evening of readings and reflections took place in the lovely setting of the Alexandra Gallery, a light modern room which overlooks a small almost Japanese-style garden – rest for the eyes and mind, on the other side of the glass.

Dr Penny Bradshaw who opened the evening emphasised the importance of Nicholson’s vision of Cumbria as being essential also to the university itself.  Nicholson knew that the rock is the basis of the distinctive and varied Cumbrian landscape, the source of its agriculture, forestry, pastoral farming, its vital industries and the spirit of the people who live and work there.  Dr Bradshaw laid stress on the breadth and balance of Nicholson’s vision, and on his understanding of the close interrelationship of human beings and nature.  In her reading and examination of Nicholson’s poem ‘To the River Duddon’ she also dwelt on the distinctiveness of Nicholson’s voice and the links and differences between his vision and that of Wordsworth.

The event was ably administered and supported by a group of students led by Freya Gallagher-Jones.  It was a great success and was very much enjoyed by all who attended it. 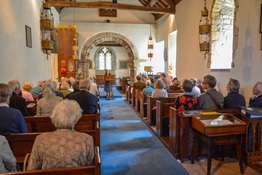 picture: John Troll
SATURDAY JULY 5th
A Celebration of the Life and Work of Norman Nicholson
ISEL, near COCKERMOUTH
Personal and literary reflections on the life and work of Norman Nicholson were presented at a special centenary event at Isel Church, near Cockermouth, hosted by Miss Mary Birkett OBE. Speakers included Irvine Hunt on his friendship with Norman, Kathleen Jones on researching the biography, and Dr. Martyn Halsall who spoke about faith in Nicholson's work. 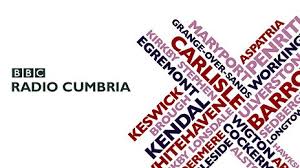 BBC Radio Cumbria aired an hour-long documentary Norman Nicholson: Something to Tell. The programme, produced and presented by NN Society member Charlie Lambert, examined the contemporary relevance of Nicholson, looking at his writings on topics such as unsustainable agriculture and nuclear hazards, and his ability to inspire poets, campaigners, teachers and students.

An edition of The Essay, the first in a series of four 5-minute talks about how geology has shaped people's favourite landscapes, made mention of Norman Nicholson and his poem Beck. The presenter was Sue Clifford, co-founder of the arts and environment organisation Common Ground. The programme can be found on the BBC iplayer here. The Nicholson reference appears just after five minutes. 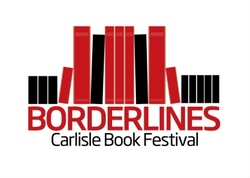 Neil Curry and Kathleen Jones discussed the work of Norman Nicholson as
part of the Borderlines Festival at Tullie House in Carlisle.

The year came to an appropriate conclusion with Radio Cumbria broadcasting a repeat of the documentary first aired in August.
SATURDAY JANUARY 10th 2015
Carlisle Cathedral

A delightful postscript to Centenary Year came in the form of a special service to mark its close in the Regimental Chapel at Carlisle Cathedral. The service was arranged by Canon Warden Jan Kearton. Five volunteer readers chose a Nicholson poem to read: Irvine Hunt - 'Sea to the West'; Miggie & David Scott - 'Rising Five'; Philip Houghton - 'Beck'; John Troll - 'The Pot Geranium' and Alan Beattie - 'On the Shore'. Irvine sadly was prevented from attending by a bereavement so Peggy Troll read for him. The Canon linked the worship to the poems and the service was a thoughtful and moving end to the centenary year.

In her column in the first edition of Comet in 2015 the editor Antoinette Fawcett looked back on the Centenary Year and observed: "It has been a notable year, one which really has helped to focus attention on the quality of Nicholson's work. We hope that it will help to secure his reputation for the future. It was an exciting time to be a member of the Norman Nicholson Society."
Please feel free to contact us with any additional information and photographs via the Contact Form